Now that we are home I have been able to upload some photos from our recent trip to India. My Jaipur photos are on another camera which is currently being charged up so will share when available.

Below in typical Andrew style is a pic of him "carrying"  the Taj Mahal. 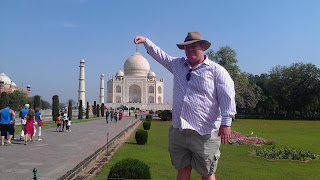 Next I couldnt resist doing a similar shot to Princess Diana and sitting on that bench in front of the Taj. 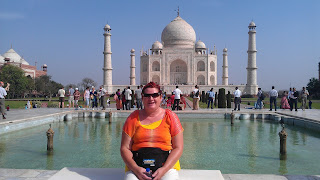 I love this photo which is a view of the Guest House taken through the marble honeycomb wall of the Taj Mahal. 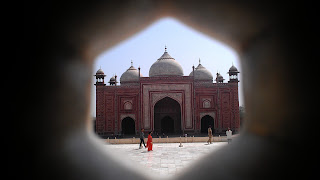 We had to kiss even though not the done thing in public - but hey the whole reason for the Taj Mahal's existence is because of the rich love that the Raj had for his Mumta Taj. 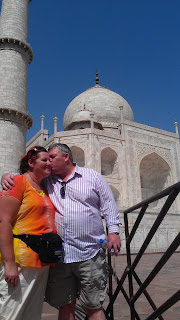 The very impressive and moving India Gate in New Delhi. 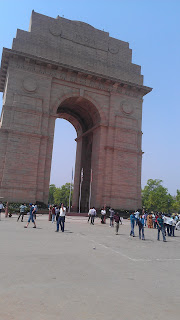 The President's Palace in New Delhi. They move you on very quickly when you are taking photos - guards and police constantly telling you to move on. They are nervous and twitchy! 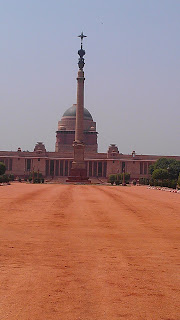 If you are in Delhi I recommend spending an hour or so at Ghandi Smirti (Museum). It is free entry but very worthwhile. I was very moved with what I saw and experienced there. Below is a representation of Ghandi's last steps as he was walking to prayers before he was assassinated in 1948. 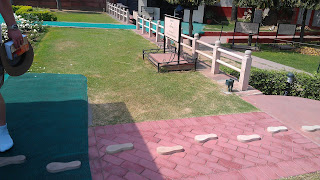 This photo depicts where Ghandi died 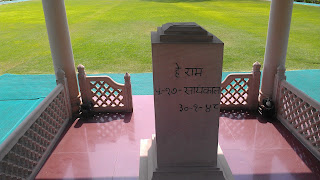 There are many photos and interactive displays about Ghandi and his work - this is just one of his sayings "I know the path It is straight and narrow It is like the edge of a sword I rejoice to walk on it" Much like surrogacy but this path will have lots of twists on it but will be like the edge of a sword sometimes and it will hurt but I am happy to have the hope and walk on this path. 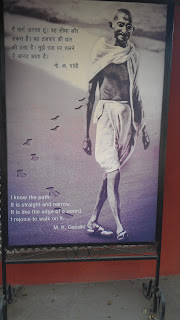 And finally these are the only wordly possessions that Ghandi had at the time of his assassination. He believed in simplicity and he only had his glasses, glass case, walking stick, 2 spoons, 1 fork, 2 knives, sharpening rock and monocle. He also had a wooden statue of the 3 monkeys - one with the hands over the eyes, 1 with hands over ears and 1 with hands over the mouth - see no evil, hear no evil, speak no evil. 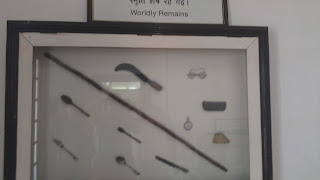